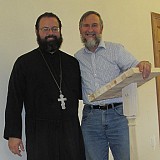 Drs. David and Mary Ford, long-time professors at St. Tikhon's, recently returned home from an extended tour of the Great American Southwest.  During their time there, they visited the OCA Monastery dedicated to St. Michael the Archangel near Canones, New Mexico.  The setting there is spectacular, and the monks' hospitality and kindness, led by the abbot, Fr. Silouan, was heartwarming.  And by surprise, a recent St. Tikhon's graduate, Fr. Zachary Lynch (2011), along with his Matushka, Natalia, and four of their five children, were staying there for several days - so the Fords had a wonderful reunion with them as well.

Then, on Saturday, June 25, Dr. David spoke after Vespers at the St. Job of Pochaev Ukrainian Orthodox Church in Los Alamos, New Mexico, on the theme, "The Home as a Little Church: The Wisdom of St. John Chrysostom."  The priest there, Fr. Theophan Mackey, is another recent graduate of our Seminary (2014).  The Fords also attended the Divine Liturgy there the next morning, and enjoyed reconnecting with the whole Mackey family.

The Fords then went to Phoenix, where they were hosted for several days by St. Tikhon's alumnus Michael Devich (2010) and his wife Heather.  During their time there, on the morning of June 29, the Fords attended the Divine Liturgy at Saints Peter and Paul OCA Church in Phoenix for their patronal feast.  Fr. David Balmer,(STS, 2006), is attached there.  He and his wife, Mary, spent the afternoon catching up with the Fords.

Two days later, the Fords visited the Western Regional Family Life Conference of the Antiochian Archdiocese, also being held in Phoenix.  There they held a book-signing, co-hosted by Dcn. Gregory Hatrak, another St. Tikhon's alumnus (1994) and former St. Tikhon’s Bookstore Manager, now Manager of St. Vladimir's Seminary Press, and the Chancellor of St. Vladimir's Seminary, Fr. Chad Hatfield.  The main book they were promoting is the newly released collection of essays and other materials on marriage entitled Glory and Honor: Orthodox Christian Resources on Marriage, published by St. Vladimir's Press, which the Fords both helped edit, as well as contributing articles to it.

The previous day, as the Fords visited St. Anthony's Greek Orthodox Monastery near Florence, Arizona, they were met there by the Hortons.  We were all very warmly greeted by the former Victor Kouzemchek - now Fr. Theo - who used to work in the St. Tikhon's Bookstore.

All in all it was a tremendously rewarding and enriching trip - as we beheld such amazing natural scenery, visited important pilgrimage sites, and reconnected wonderfully with so many people who have been associated with our St. Tikhon's community through the years.  Thanks be to GOD!