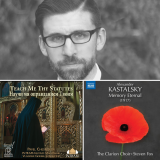 St. Tikhon’s Monastery and Seminary are proud to announce that their very own music director, Benedict Sheehan, played key roles in two of the 2019 GRAMMY®-nominated projects for “Best Choral Performance” announced last Thursday.

The Clarion Choir’s recently-released disc “Kastalsky: Memory Eternal” was one of this year’s nominees. Sheehan worked closely with Clarion music director Steven Fox on every phase of this project from its inception in 2016 to its culmination in the premiere of the fully-orchestrated version of the work in the Washington National Cathedral this past October.

Clarion’s recording of Memory Eternal to the Fallen Heroes (1917), the a cappella version of the larger work, is the world premiere recording of Alexander Kastalsky’s masterful composition that commemorates the Allied slain of the First World War. Sheehan is credited as Associate Conductor on this release. He also helped finalize scores for recording and was primary music editor for one of the stand-alone pieces on the album, Kastalsky’s never-before-recorded From My Youth (1905).

PaTRAM Institute Male Choir’s disc “Teach Me Thy Statutes,” a recording of works by Russian composer Pavel Chesnokov, was another of this year’s nominees. The disc also received Music Web International’s prestigious award for “Recording of the Year.” Sheehan was a chorus member on this project, along with St. Tikhon’s Bookstore manager Fr. Mikel Hill, which was recorded in 2016 in Saratov, Russia, under the direction of Vladimir Gorbik.  Sheehan is a co-founder of the PaTRAM Institute together with Maestro Gorbik and CEO Alexis Lukianov. He helped organize the choir’s debut concert tour and first series of masterclasses—many of which were hosted by St. Tikhon’s.

In 2019 Sheehan will conduct a combined choir of the Chamber Choir of St. Tikhon’s Monastery, the PaTRAM Institute Singers, and the St. Tikhon’s Festival Choir in the world premiere of his own Liturgy of St. John Chrysostom (2018), a piece commissioned by the PaTRAM Institute. He will also conduct the mixed choir for PaTRAM’s Summer Academy in Lakewood, New Jersey.

Sheehan also has close ties to yet a third GRAMMY® nominee this year for “Best Choral Performance.” Boston-based Skylark Vocal Ensemble, led by conductor Matthew Guard, was nominated for their album “Seven Words from the Cross.” Sheehan is currently working with Skylark to compose music for their upcoming “Once Upon a Time” program, based on the Grimm Brothers’ Snow White and Hans Christian Andersen’s The Little Mermaid. The project will be premiered and recorded by Skylark in June of 2019.