His Eminence Archbishop David of Sitka and Alaska of the Orthodox Church in America fell asleep in the Lord today,  November 27, 2020, at the age of 68, following a short battle with aggressive renal cancer.

His Eminence had served as the bishop of Alaska since 2014.

May Archbishop David's Memory be Eternal! 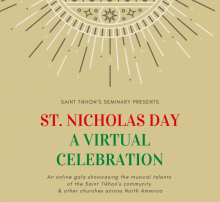 This past Friday afternoon (October 30, 2020), students, faculty, and alumni from St. Tikhon’s Orthodox Theological seminary enjoyed the rare privilege of a one-on-one video dialogue with Elder Ephraim of Vatopedi Monastery on Mount Athos. This event marked the first time that an English speaking group was granted this amazing opportunity. After sharing some inspiring words of wisdom about the priesthood, the holy elder opened the floor to questions.

Many of the attendees from St. Tikhon’s were chosen to speak with Elder Ephraim face-to-face, each receiving his full and loving attention. The questions ran the gamut from deeply personal to broadly societal, but regardless of their initial starting point, everyone in attendance walked away having received their own personal word from the Holy Mountain.

SUNDAY, 18 October, 2020 -- His Grace, the Right Reverend Alexis, on behalf of the Metropolitan of the OCA, ordained two students of Saint Tikhon's Orthodox Theological Seminary to higher ranks by the Grace of the Holy Spirit.  In a joy-filled Monastery Church Liturgy that was live-streamed across the world, Matthew Mcdonald (STOTS 2021) was ordained to the Holy Priesthood, while Jeremiah McKemy (STOTS 2021) was ordained to the Diaconate in Christ.  Both of the newly elevated Fathers and their families were addressed by His Grace at the close of the Divine Liturgy; he emphasized to them that these offices and ministries are shared by the spouses.  Hearing the ordination troparia twice-over during the single service was a real treat for all those blessed to attend, sing, and serve.  AXIOS to Father Matthew and Father Deacon Jeremiah as they continue their learning at the seminary and their service to the whole Church!  And Many Years to their families!

Minding the Gap between True Theology and Popular Online Theology

For St. Tikhon's Founder's Lecture, we had the pleasure of hearing Priest John Cox speak to the issues we face when attempting to enter theological dialogue on the internet. Fr. John is the rector of Holy Dormition Orthodox Church in Norfolk, Virginia, and is also the managing editor of the digital journal, Rule of Faith <https://ruleoffaith.org/>. So, he comes to this topic not only as a parish priest who has a practical, everyday sense for his own parishioners, but also as an editor of a journal aimed at taking part in online theological discussion.

The title of his talk, "Mind the Gap: First Principles and Popular Theology" hints toward his eventual point: it is fitting to engage online theological discussion, but keeping certain guidelines or emphases in mind. One of the more important principles he shared was to be careful to remain connected to the original sources, putting priority on the act of exegesis of the Scriptures and clearly referencing the Church Fathers, that is, instead of putting words in the Fathers' mouths to build our online argument.

Another point he made, which is all too important online when the desire to react, often negatively, is incredibly tempting, was to "check the negative, ugly, reactive impulse" and "instead respond from a  place that is life-giving and hopeful", and "a place of virtue".

When asked, after the talk to give a Twitter version of his talk, after some thought, he wisely said, "If you don't know where you've been, you might end up anywhere."

Orientation week at St. Tikhon's was, in some ways, normal, but just like everyone around the country trying to figure out how to start school in light of the pandemic, there was plenty about this orientation week that required adjusting.

We started off the week with a Liturgy, but the setting of the Liturgy is telling of the times. We celebrated Liturgy in the "patriarchal pavilion", so-named for its original purpose to house the multitudes of pilgrims which coincided with the visit of Patriarch Alexei II back in the early 90s. Now, due to its immense floor space, we can easily distance seminarians and families. We will be able to alternate between the monastery church and the pavilion for services till restrictions lessen and allow a return to more "normal programming".

Incoming students experienced a somewhat normal orientation week...except that masks are in the picture. They spoke to Abp. Michael, acquainted themselves with the staff, were fitted into a choir group, and even received a tour of the monastery church by the monastic sacristan, as they begin to scratch the surface of the depth of history and beauty to be found at St. Tikhon's Monastery across the road.

Returning students do not usually return for the first three days of orientation, but this year, those three days became a rejuvenation of the school. Normally, immediately preceding the monastery's Memorial Day Pilgrimage, everybody takes part in a work week. This year, that work week never happened, and the school needed some help, more than what two or three folks could handle over the summer. It was incredibly helpful to the school: messy back rooms which had accumulated boxes of books and audio-visual equipment and photographs were cleaned out and organized, the old kitchen area was ripped, chipped, and mopped down the foundational concrete to be returned to a useful storage space, and the whole school was given a good, general cleaning.

After our Thursday molieben service, Abp. Michael, our rector, joined us for the blessing of cassocks. He and Apr. John Parker, our dean, not only blessed cassocks but gave some fitting and encouraging words about the importance of the cassock and how it is much more than just an antiquated piece of clerical clothing.

We wrapped up the orientation week with Metropolitan Tikhon. He shared on the diaconate and the life of service to which all Christian are called, and then on the priesthood. The highlights for all of us present were his examples: everything from a heart-wrenching lesson he learned about knowing when to put down a seemingly important task to take care of the people around us in an unexpected way, to an illustration of "a battle of the wits between a certain man in black and the Great Vizzini", a comical illustration that kept the room laughing and learning.

Now, it is time to begin the school year itself, some in-person classes, some online, and some hybrids of the two. As we prepare for this coming school year, our prayer, as it says in the monastery's prayer book, is this: "Lord Jesus Christ, open the eyes of my heart, that I may hear thy word and understand it and so fulfill thy will." 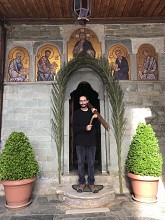 I’ve been living in Thessaloniki for the past year now, acquiring proficiency in the language, and entering into the spiritual, liturgical, and pastoral life of the Church, both here and on Mount Athos.

This is the second year of the St. Maximos the Greek Institute Program in Advanced Studies in Orthodox Theology and Spiritual Life which takes place at Vatopaidi Monastery and is under the spiritual direction of Geronta Ephraim, the monastery’s abbot. It is directed to young doctoral students or doctoral graduates of Orthodox Theology and focuses on the relationship between the contemporary saints and elders of Mount Athos and the Patristic tradition of ascetic experience. Eight of the applicants were selected to come to the Monastery this weekend for interviews with the board which included Mantzaridis, and a final interview with Geronta Ephraim, and all eight of us were accepted this year, four of which are young laymen, and four of which are clergy/monastics: Two Americans, two Serbians, two Syrians, one Romanian, and a Greek. We will become October 5th, and spend two months at Vatopaidi for a year (two months in the Monastery, two months off, two months on, etc.), engaging in intensive sessions taught by renown Orthodox theologians and fathers from Athos, Greece, and around the world. The program takes place in Modern Greek and will emphasize also Ancient and Patristic Greek and contemporary research on the new saints. We will complete and share six essays throughout the course of the year and in the end produce a 50+ page thesis. We will also take place in the daily liturgical life of the monastery and have access to the many resources of the monastery. The program will support us with a monthly scholarship allowance.

I’m honored to be one of the two American Orthodox representatives in this program this year, and pray that this experience will help the new generation of Orthodox clergy and theologians contribute to the ongoing Patristic renewal of Orthodox Theology in the United States, and continue to encourage for all Orthodox Christians the spiritual relationship between the Orthodox ascetic inheritance of Greece and Mount Athos, with the United States.