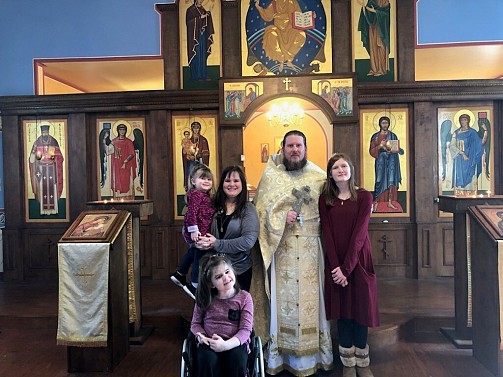 Nativity is a time full of joy, but in such a trying year, it is wonderful to have the added joy of an ordination on Christmas. Recent St. Tikhon's graduate, Herman Garrison, was ordained to the priesthood on Nativity by Archbishop Alexander (Golitzin) in St. Seraphim Cathedral in Dallas. Also serving in the liturgy were Archimandrite Gerasim (Eliel), cathedral rector and Administrator of the Diocese of the South, Archpriest John Anderson (STOTS alumnus '95), Deacon Theophan Warren, and (a current seminarian of St. Tikhon's) Deacon Michael Rehmet.

Fr. Herman's family and some special guests were able to attend: his wife, Ruth, as well as his three daughters, Josephine, Catherine, and Anastasia, along with his parents Russell and Helen Garrison. Fr. Herman was sent to seminary by and will now be serving in St. Paul the Apostle Orthodox Church in Denison, whose long-time priest, Archpriest Michael Storozuk, reposed in 2018, while Fr. Herman was in seminary. Fr. Michael's wife, Matushka Patricia Storozuk, was also present, putting a beautiful and fitting "Axios" on Fr. Herman's ordination.

Fr. Herman says:
"There are so many I could thank for all their wonderful support while journeying through seminary and preparing for this calling. Just a small few to mention are my family, my home parish of St. Paul, the Holy Nativity parish in Shreveport, Archpriest Daniel Donlick, and all those who interceded for us with their prayers. I am forever indebted to the kindness shown to us by Archbishop Michael, Archpriest Dionysius, and all the administration at St. Tikhon's seminary who gave us such peace as we labored at seminary. I am also grateful for my professors, teachers, and classmates who challenged me, encouraged me, and endured my short-comings. St. Tikhon's seminary and monastery will forever hold a special place in my heart for their guidance and care. I give thanks to God for all things and I am humbled to serve in this new frontier of Northeast Texas and Southeast Oklahoma."

Priest Herman is currently serving the parish of St. Paul in Denison, Texas and is involved in assisting Archpriest John Anderson in aiding missions in Northeast Texas and Southeast Oklahoma.