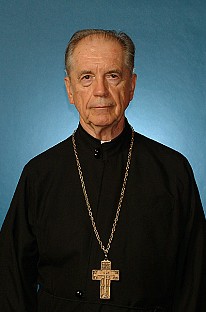 The Mitred Archpriest Daniel D. Ressetar fell asleep in the Lord on the morning of January 20, 2021. He was born March 28, 1927 in Edwardsville, PA to Archpriest Dimitri and Matushka Margarita Ressetar. He married Theodora (Prislopsky) in 1958. A graduate of Saint Tikhon’s Orthodox Theological Seminary, he was ordained to the Holy Diaconate by Archbishop John (Garklavs) of Chicago and to the Holy Priesthood by Archbishop Dmitri (Magan) of Philadelphia in 1958. Father Daniel served parishes in Eastern Pennsylvania and as a United States Air Force Military Chaplain. Continuing in his family’s tradition, he was an accomplished church musician and singer. He was awarded the Saint Innocent Award (Silver Class) by the Holy Synod in 2003 and the Mitra in 2017. He retired in 2006 and remained active at Christ the Savior Church in Harrisburg, PA as pastor emeritus.

He is survived by his wife, Matushka Theodora, and his three sons, Nicholas, Gregory, and Alexander.

May Father Daniel’s memory be eternal!