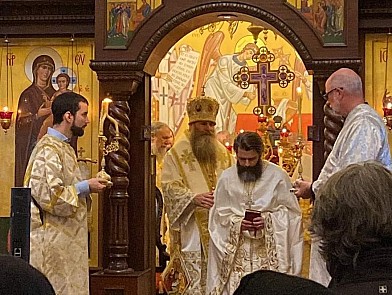 On Friday, December 26, 2021, Deacon Maximus Gibson was ordained to the Holy Priesthood by His Grace Bishop Gerasim of the Diocese of Fort Worth at St. Seraphim Cathedral in Dallas, Texas.

As a former parishioner of St. Maximus, Father Maximus faithfully helped his parish, serving on the Church Council and doing everything he could to advance the ministry of the Church. He involved himself intensively in the services of the Church, and fervently read the early morning Matins services during the week with Father Justin.

Father Maximus was able to leverage his knowledge of the services at St. Tikhon’s, helping to guide and teach less experienced seminarians. He is known for his patience, depth of thought, and cardigan sweaters.