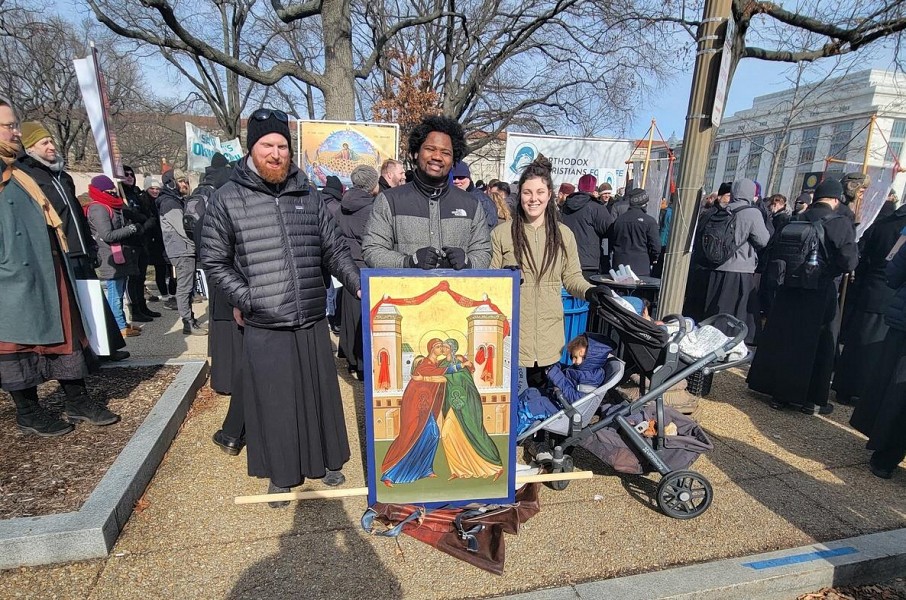 On Friday, January 21st, 2021, a group of 15 seminarians, family members, and faculty from St. Tikhon’s braved the cold temperatures to attend the March for Life in Washington, D.C. While St. Tikhon’s, historically, has sent delegations almost every year, this year carried extra significance, as last year’s March was forced to take place virtually. In addition to our delegation, the strong Orthodox presence at the March, coordinated by Orthodox Christians for Life, featured hierarchs and faithful from many different Orthodox Jurisdictions, as well as contingents from St. Vladimir’s Seminary and St. Sophia’s Seminary, and many STOTS alumni. Following the Moleben for an End to Abortion, celebrated by His Beatitude, Metropolitan Tikhon, our Seminarians and families took an active role in the March, carrying banners and the processional icon of the Visitation of the Theotokos and Saint Elizabeth, and leading the assembled faithful in singing hymns. It was extraordinarily beautiful to see faithful of all ages and jurisdictions uniting together to advocate for the Pro-Life tenants of our Orthodox Faith, singing the hymns of different traditions with one voice and praying as one Church to our Lord and His Saints for an end to Abortion. Those who attended the March came away strengthened in our Faith, heartened by the response of the Orthodox Community to the sin of Abortion and encouraged by the unity of the Orthodox faithful and hierarchs in America. While we hope and pray that no more of these Marches would be necessary, we believe that our St. Tikhon’s seminarians will continue to be a part of this powerful event for as long as it exists, in the forefront of the fight for God’s children and their right to life.