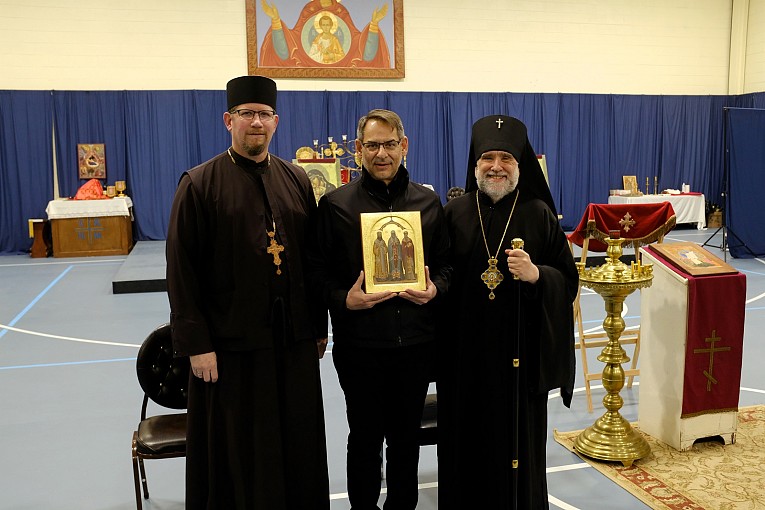 On Tuesday, March 9, 2021, the seminary community was singing the Saint Tikhon’s blues.

Whether they experienced him with or without the mustache, hundreds of seminary students have had the honor of studying theology under Dr. Harry Boosalis over the years, from Cosmology to Christology to Eschatology. While first-year seminarians might at first feel rather befuddled upon hearing Doctor Harry’s very first query (“Do you know Jesus?”), no student can walk away from his courses without a deeper appreciation for how precious man is in the sight of God, as well as a deeper appreciation for the professor himself.

Outside of class, Dr. Harry has always been ready to meet with students to discuss life in “NEPA,” a potential thesis idea, or their future pastoral ministries (“How are you gonna explain that to the yiayias in your parish one day?”). He has visited church communities to give clear and understandable presentations on Orthodox theology. And with his intimate connections to the monastic brotherhood of the Holy Monastery of Iveron, Dr. Harry has led a number of trips with both students and professors to Mount Athos (with pit stops in Thessaloniki to boot). Travelling alongside one of their favorite Greek professors, members of the Saint Tikhon’s community have had the opportunity to visit the Panayia’s Garden in preparation for ordination or other ecclesial vocations in the world. And even those students unable to visit Iveron—along with its cherished “Portaitissa” icon of the Theotokos—have nevertheless travelled a somewhat shorter distance with Dr. Harry to witness the streaming of the “Kardiotissa” icon of the Mother of God right here in the Commonwealth of Pennsylvania.

But Dr. Harry’s role in the community extends beyond his love for the Panayia and her Divine Child: he has been the headliner of countless extracurricular events in the community, starring as the bass guitarist for such bands as “the Clerical Errors” and “the Dogmatix.” The many children of Saint Tikhon’s have always been ready to get up and dance for the band’s renditions of classic Motown hits and Beatles tunes; likewise, the seminarians who have spent time playing or singing alongside Dr. Harry are usually quick to commit to reunion gigs, especially in order to promote the school to which Dr. Harry has devoted his many talents for decades.

“I don’t know… Is that what you believed in your former tradition?”

While those unforgettable one-on-one theology quizzes have certainly elicited fear and trembling for seminarians lax in note-taking, the familiar voice and gleeful laughter of Dr. Harry has always been a comforting sound (which is no doubt why some of his unique mannerisms have lovingly been emulated by portions of the student body throughout the ages...). Even in the various books authored by Dr. Harry, many of which have been published by the Monastery’s press, one can read his simple yet profound paragraphs—exploring the wisdom of modern Elders and the boldness of the Early Fathers—with his exact tone of voice in mind.

“You know what guys? Why don’t we save that for next semester? Is that okay?”

But, alas, the time has finally come for Dr. Harry to move on. Newly a citizen of Greece, the beloved professor leaves behind so many students and alumni, faculty and administration, friends and neighbors who will never forget how his efforts and his charm have enhanced their lives. The Saint Tikhon’s students celebrated him with a personalized concert dedicated to his love for music, and the graduating class even honored him with the prestigious Father Alexander Atty Service Award on Tuesday. He was also presented with heartfelt messages from all of his colleagues, not to mention a freshly composed icon of Saints Tikhon of Zadonsk and Tikhon of Moscow, alongside his own patron, the venerable Hieromartyr Haralambos. As Dr. Harry Boosalis steps down from his role at this school, we all wish him many blessed years and safe travels, and we sincerely pray that the Most Holy Lady might protect and shelter him all the days of his life.